Menu
GO TO THE SHOP

The Pipistrello lamp: an absolute icon of Italian design

When, in 1965, the designers Elio Martinelli and Gae Aulenti spent sleepless nights testing a revolutionary lamp design capable of diffusing a soft and homogeneous light, they had no idea of the worldwide success that awaited them. He, Elio Martinelli, is the head of the Italian company Martinelli Luce, already recognized in Italy as the reference in the creation of lighting; she, Gae Aulenti, architect and designer, is one of the few women to break through in the very male world of post-war Italian design, then in full boom. Their lamp, the Pipistrello, became one of the icons of post-war Italian design and continues to fascinate. Let’s take a look at what made this lamp an icon of modern and contemporary design.

In the beginning was a strange and curious name: ” Pipistrello “, what could it mean? Gae Aulenti (1927-2012), who created this singular light fixture, gave it this name which means “bat” in Italian. The lampshade with its many curves effectively evokes the silhouette of a bat… An unusual idea!

To be honest, the unusual shape is surprising for the time, but it is part of a process: Gae Aulenti designed this lamp to pay tribute to the elegant and curved forms of Art Nouveau, which was inspired by the natural forms of fauna and flora.

Elio Martinelli (1921-2004), who in the 1950s became a recognized specialist in the production of lamps with the creation of the company Martinelli Luce, also drew his creativity from nature, revealing lines and shapes of surprising originality. That’s why, when Gae Aulenti solicits him sketches in hand, for the realization of his lamp, Martinelli is convinced and says yes to the project.

At the time, it was unusual for a woman architect and designer to convince an industrialist to manufacture her own creation. In 1965, Gae Aulenti was 38 years old and had a solid education. She graduated in architecture from the prestigious Politecnicodi Milano in 1953, where she also (Politecnico di Milano) in 1953, where she also obtained the professional diploma – a rare feat for a woman at the time – and has been teaching this discipline since 1964. She has also been a member of the editorial staff of Casabella, an international monthly magazine of architecture, urban planning and design, for the past ten years.

How is the Pipistrello a very innovative piece for its time? First of all, the aesthetic choice. Gae Aulenti succeeded in combining the very geometric lines of the architecture of the American buildings of the 1930s (the basis of the lamp) with the sculptural lines of Art Nouveau. A philosophy that fits well with the DNA of Martinelli: a reflection to marry organic forms to a rigorous and pure design.

A technological choice then: the base in lacquered metal is adjustable in height thanks to a telescopic arm in steel. Above all, Elio Martinelli, who was constantly looking for new technologies and innovations, will, with Gae Aulenti, design the diffuser of the lamp in white opal methacrylate, a material called opalescent. The goal: to project a soft and homogeneous light on a material that then takes on a “woolly” hue. Another innovation: the telescopic part and the methacrylate diffuser are made using innovative molding techniques for the time.

The Pipistrello has become an iconic piece thanks to its timeless style, so much so that some even call it ” La madeleine de Proust des amoureux du design “. Indeed, it is a piece that with its elegance and modernity fits equally well in a contemporary, industrial or classic interior!

The telescopic tube that allows you to adjust its height from 66 to 86 cm also contributes to make the Pipistrello a lamp that adapts to all configurations: at the same time bedside lamp, desk lamp, living room lamp or even placed directly on the floor to become a real piece of furniture!

The Italian firm Martinelli Luce is still the sole owner of the rights to the original Pipistrello design. Its worldwide bestseller is still popular, because the Italian publisher has been able to evolve the model over time. For example, the Pipistrello is available in several colors such as brown, purple and agave green (in addition to white and black). The materials have also evolved: the model exists in aluminum, copper, silver and satin brass. In 2013, 2 other lighter and smaller models are proposed: the Med Pipistrello (diameter 40 cm, adjustable height between 50 and 62 cm) and the Mini Pipistrello (diameter of 27 cm, fixed height of 35 cm, weight: 2.5 kg against 10 Kg for the original model). 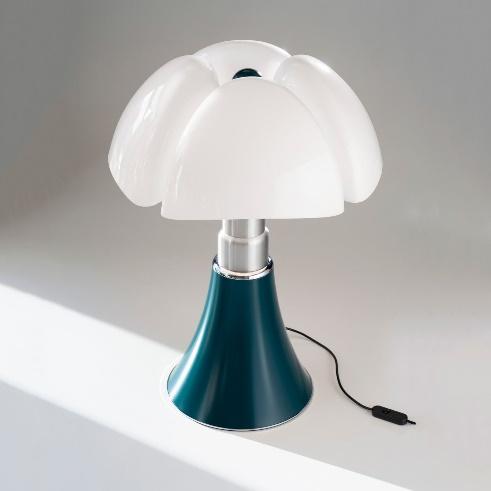 Pipistrello lamp in agave green, a color chosen to enhance the design of the room.

Martinelli Luce also adapted the technology of the time to its famous lamp. LEDs have replaced the bulbs and are offered in a dimmable version that allows you to vary the light intensity by simply applying your fingers. Finally, in 2019, the Italian publisher launched its “Pispistrello 4.0 “, a version with Tunable White Led technology, through a mobile app (in collaboration with CASAMBI). Original, timeless and elegant, the Pipistrello seems timeless, a “must-have” for all fans of vintage design!